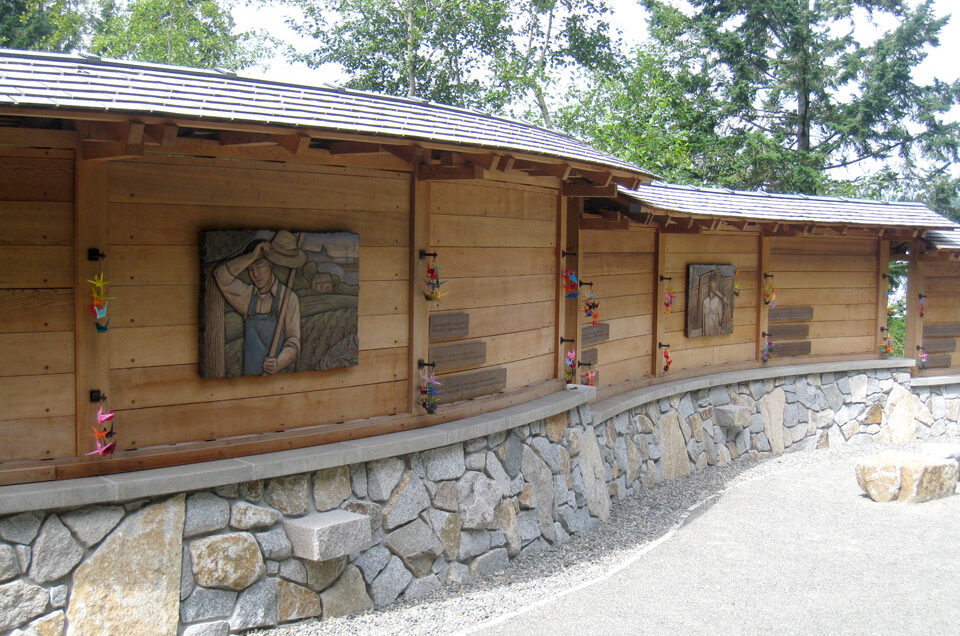 Nidoto Nai Yoni, translated as “Let It Not Happen Again” is the motto and mission of the Bainbridge Island Japanese American Exclusion Memorial. The Memorial is located on the site of the former Eagledale ferry dock on Bainbridge Island, Washington, on March 30, 1942, two hundred twenty–seven men, women and children — two–thirds of them American citizens — were forcibly removed from their homes, rounded up by US Army soldiers armed with rifles fixed with bayonets and boarded a ferry to Seattle. (More background information:  New York Times  “A Wall to Remember Era’s First Exiles” 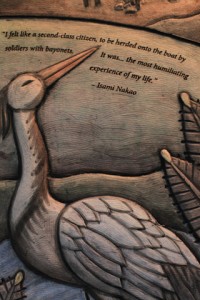 “This project (the BIJAEM Memorial Sculptures) has been one of the most rewarding projects of my career.  There were many challenges throughout the process, such as how to make the sculptures curved to conform to the shape of the wall; how to integrate the text of the quotes into the imagery; and how to layer the sculptures with thin washes of glazes, as this was a new process for me that required quite a bit of experimentation.  The greatest challenge was coming up with designs for the sculptures themselves, as these were meant to evoke the powerful experiences of the Japanese Americans of Bainbridge Island.

I had been given some excellent direction and background material from the BIJAEM committee, EDX design and Turner Exhibits.  Five basic themes had been identified and I had been supplied with stacks of related information, but it was only after I sat down with a sketchbook and the photos, quotes and personal accounts that the significance of the task began to sink in and it began to feel rather daunting.

As I absorbed the accounts of 70 years ago some of it began to take on a personal feeling.  The faces of the children in the photos began to remind me of my own 6-year old daughter and my 1-year old son, and I wondered if I could also keep the stoic gaze that those parents wore.  It made me think of all the things that could be lost– our house, our careers, our friends, and our community.  I found that I had often inserted my own family in many of the stories and scenes that became the sketches.

The committee (which included several who had been incarcerated as young children) expressed a clear desire that the images would express that their story was an American story (as most were U.S. citizens at the time).  Eventually the idea for a sculptural style developed that would evoke the WPA murals of the 1920’s.  I also began to develop a technique for layering thin washes of glazes over the clay to create muted colors that might be reminiscent of a Japanese woodblock print.  In this way I hoped that the sculptures could have both a “heroic” American feel but also a reference to the cultural background of the excluded Bainbridge Islanders.

It was a great honor to be have been part of this very meaningful project.  Many thanks to Steve Groves, David Edquist, Megan Martin, Frank, Sallie, John, Lily, Mary and all the other people who warmly shared their thoughts and stories with me”